Never to be Forgotten 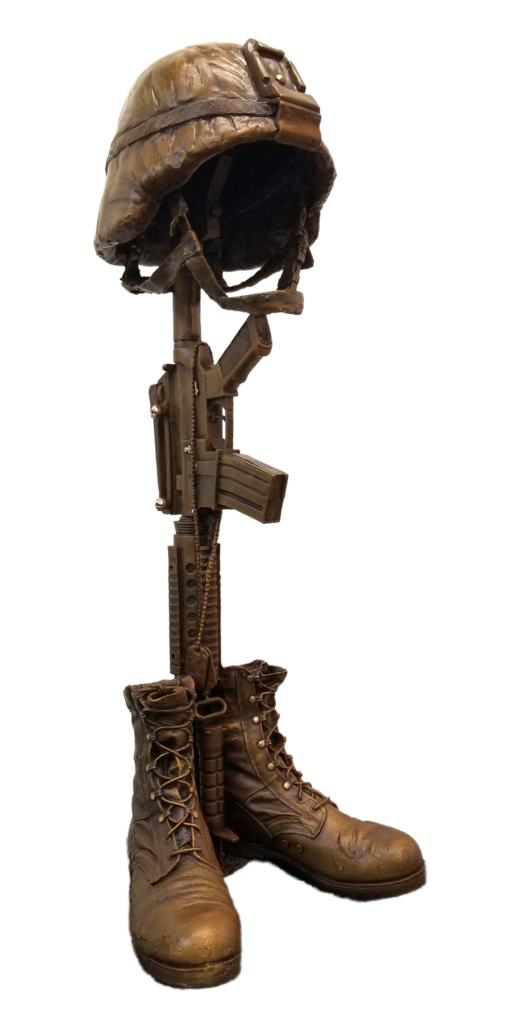 The Battlefield Cross or The Fallen Soldier Battle Cross is an iconic symbol which honors American men and women who gave their lives serving their country. This touching war memorial recreates the ceremonial arrangement that soldiers in the field use to honor a soldier who has died on the battleground. The helmet and dog tags signify the fallen solider; the inverted rifle with bayonet denotes a time for prayer and the combat boots represent the final march of a soldier’s last battle.

The image of the Battlefield Cross may date back as far as the American Civil War when it was used to mark the temporary grave of a fallen soldier. It was commonly used in World War I and II as a marker for personnel to remove the body for burial and also as a memorial.

Since then, it has become a way for the living to memorialize and mourn those who die in battle. Beginning with the Gulf War in 1991, and during Operations Iraqi Freedom and Enduring Freedom, the latest version of the battlefield cross has become the symbol of loss and closure for the living.

The United States has tragically lost more than 7,000 soldiers in Iraq and Afghanistan. Each of them mourned by family and friends who want their loved one Never to be Forgotten.

This one and quarter size monument is a powerful and dignified way to remind people of the price of freedom. Every detail has been approved by a military advisor for its accuracy and arrangement. It is so lifelike; it invites the viewer to touch the dog tags and feel the texture of the helmet. Those special details are integrated into the sculpture so it is safe for public display.   It is cast in high-quality American bronze using the ancient “lost-wax” method of bronze casting and is built to last for many generations to come.

Call or write for additional information about how this beautiful war memorial can be installed in your community as a living reminder that our soldiers and their sacrifice are Never to be Forgotten. 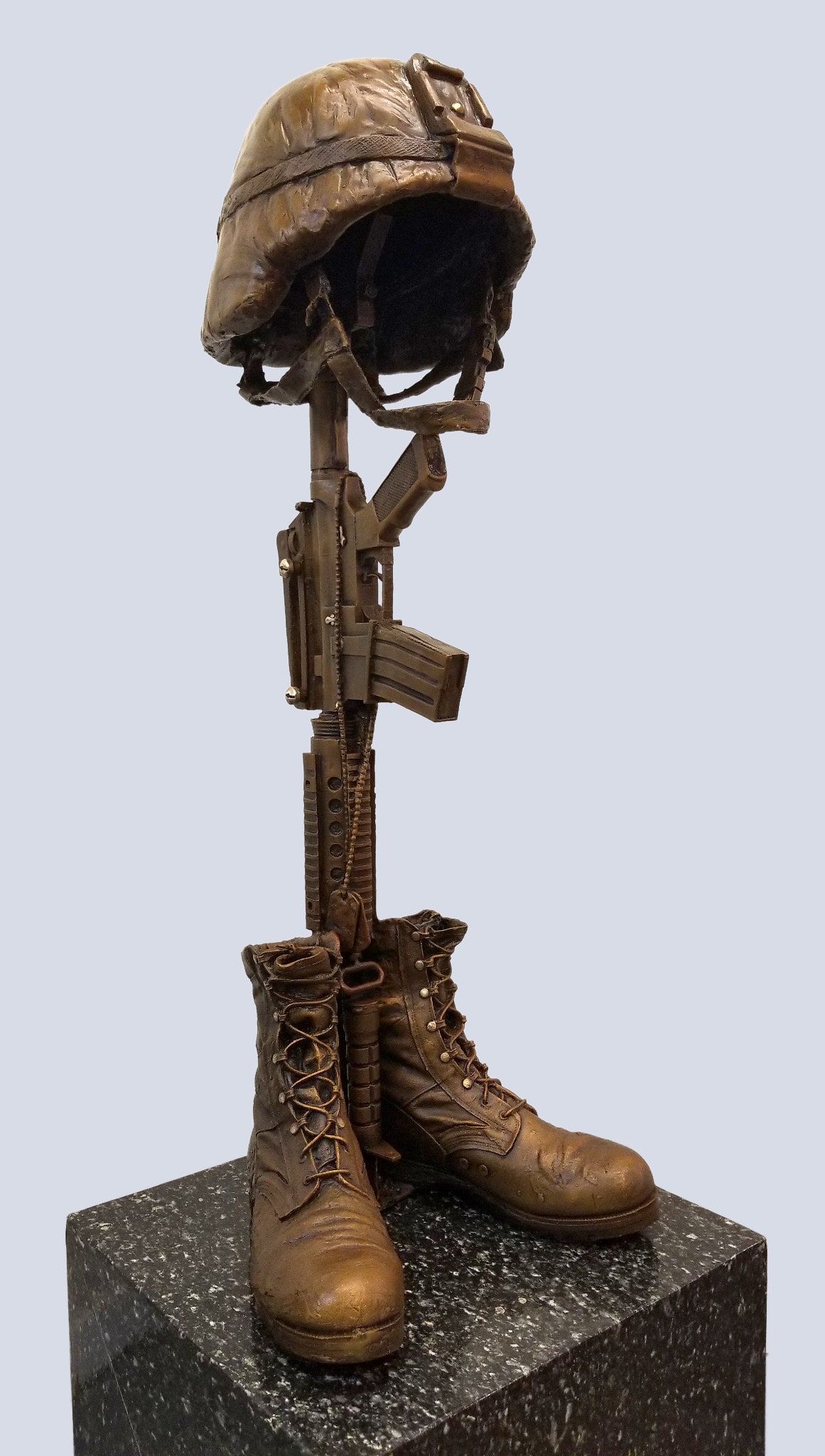 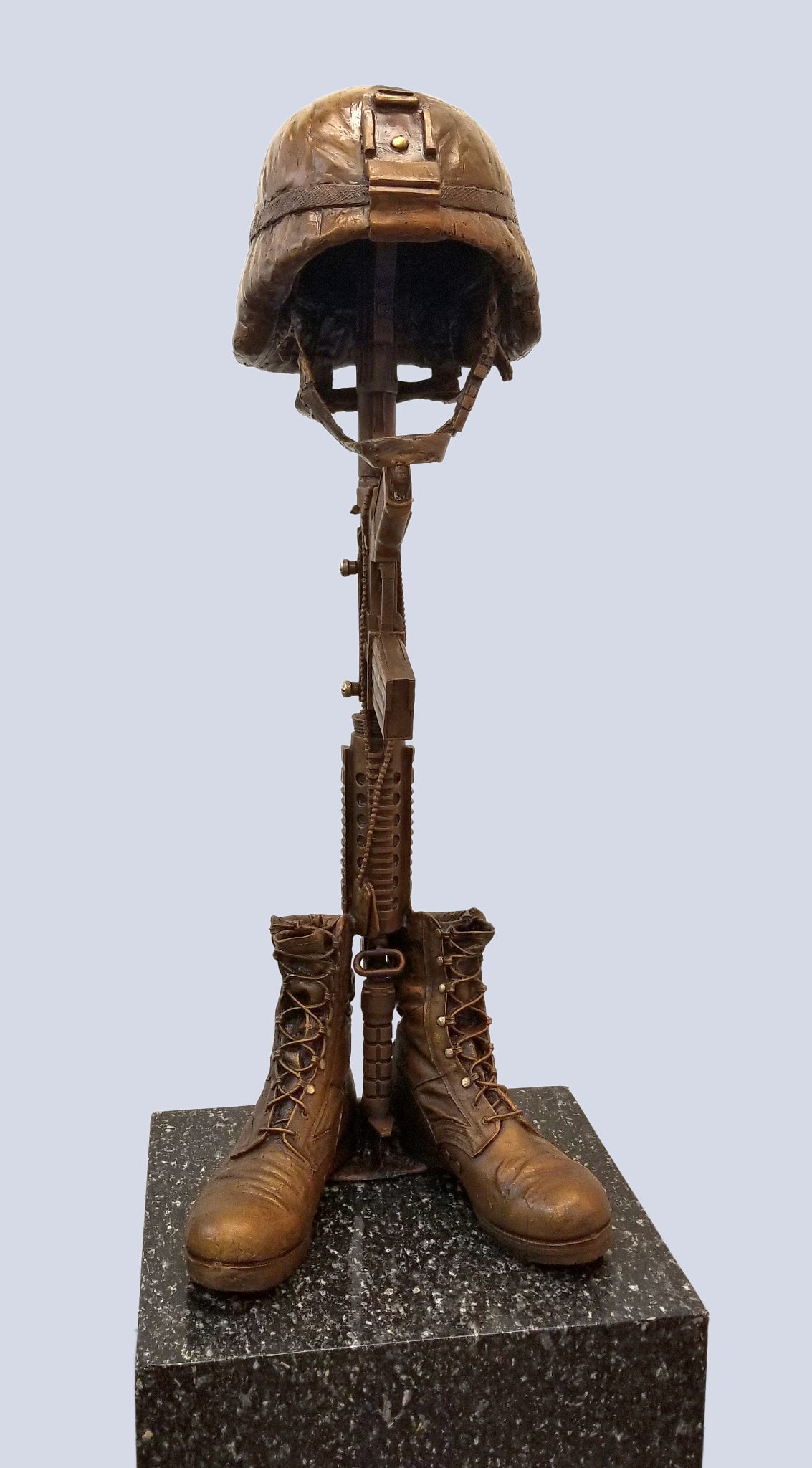 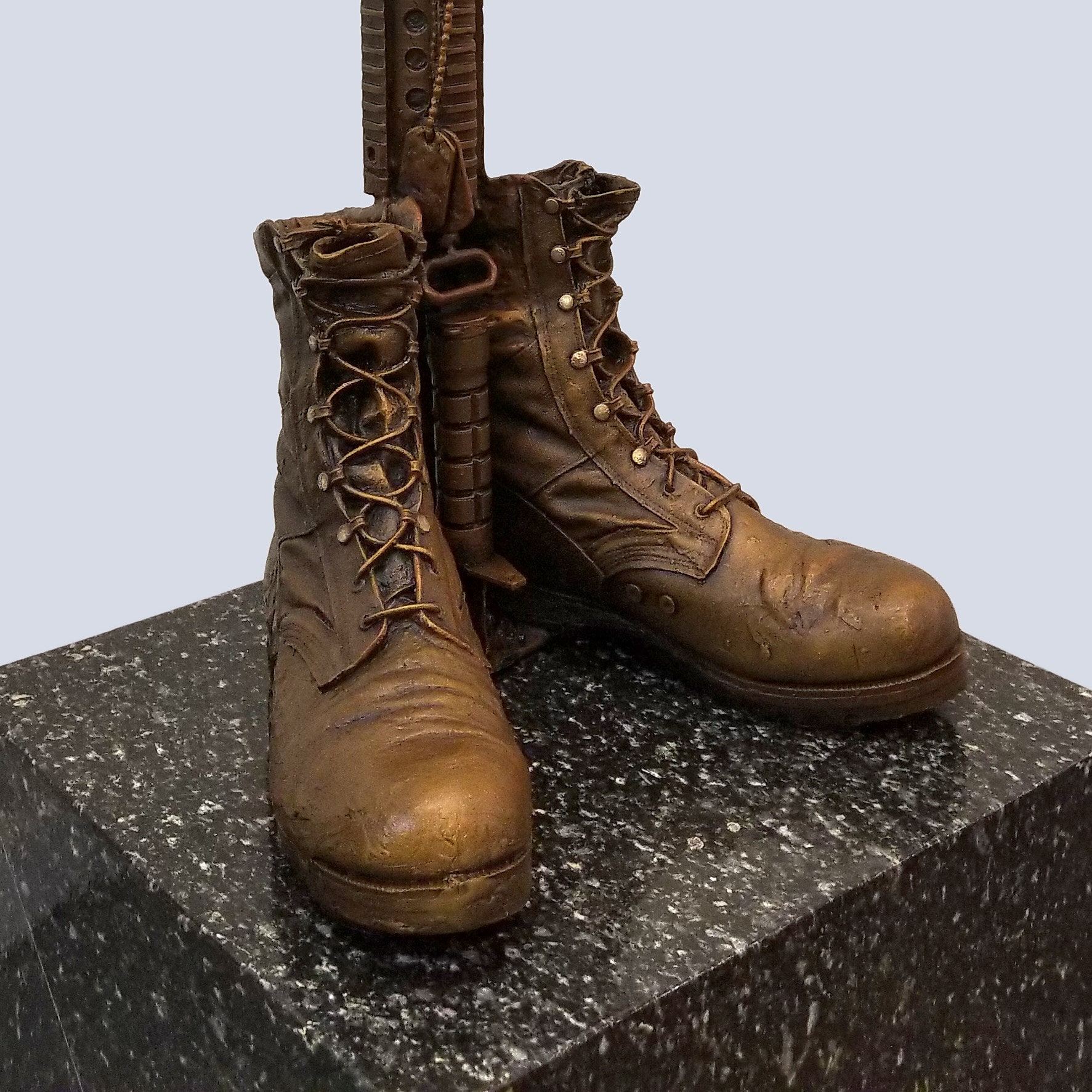 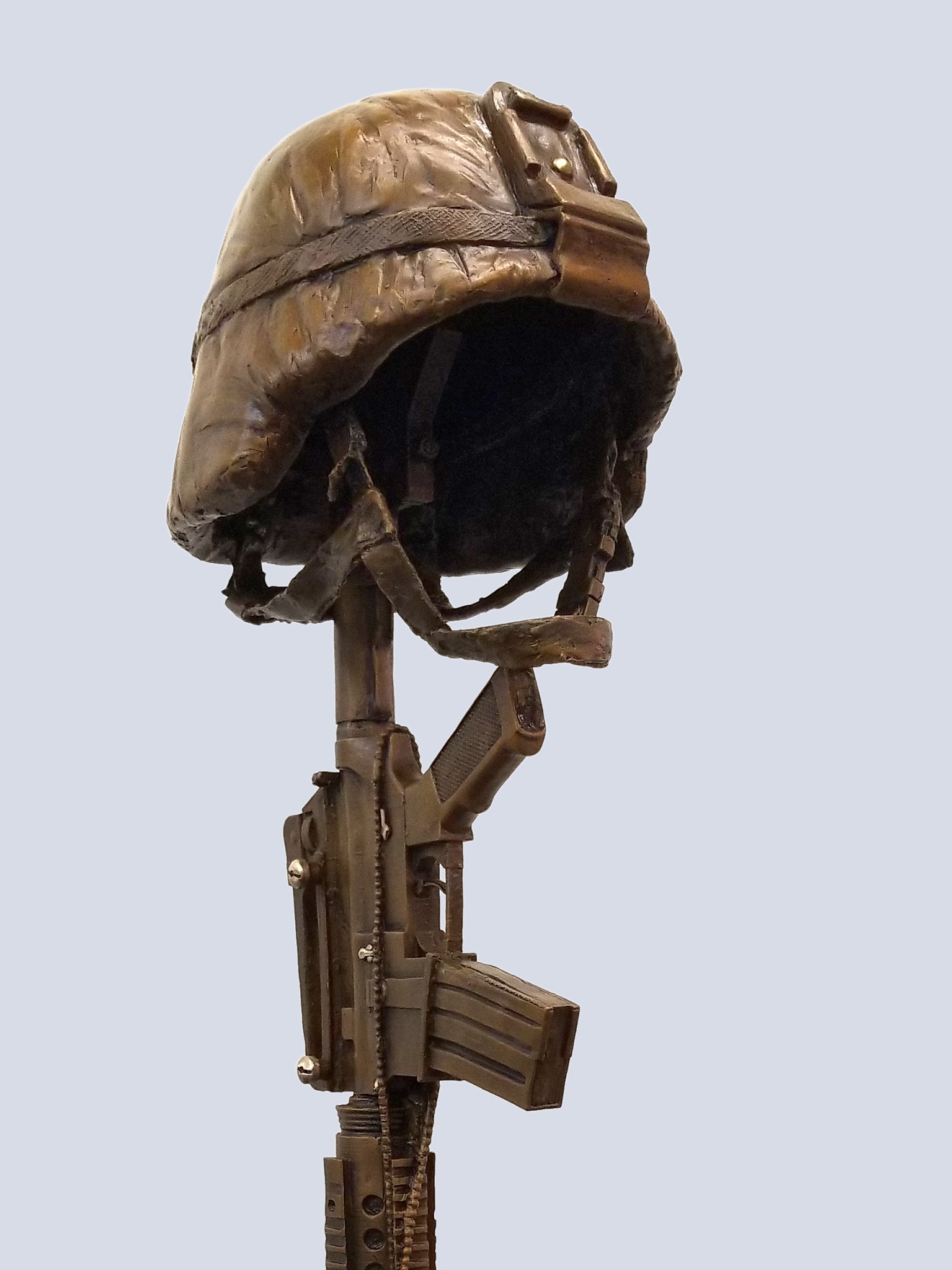 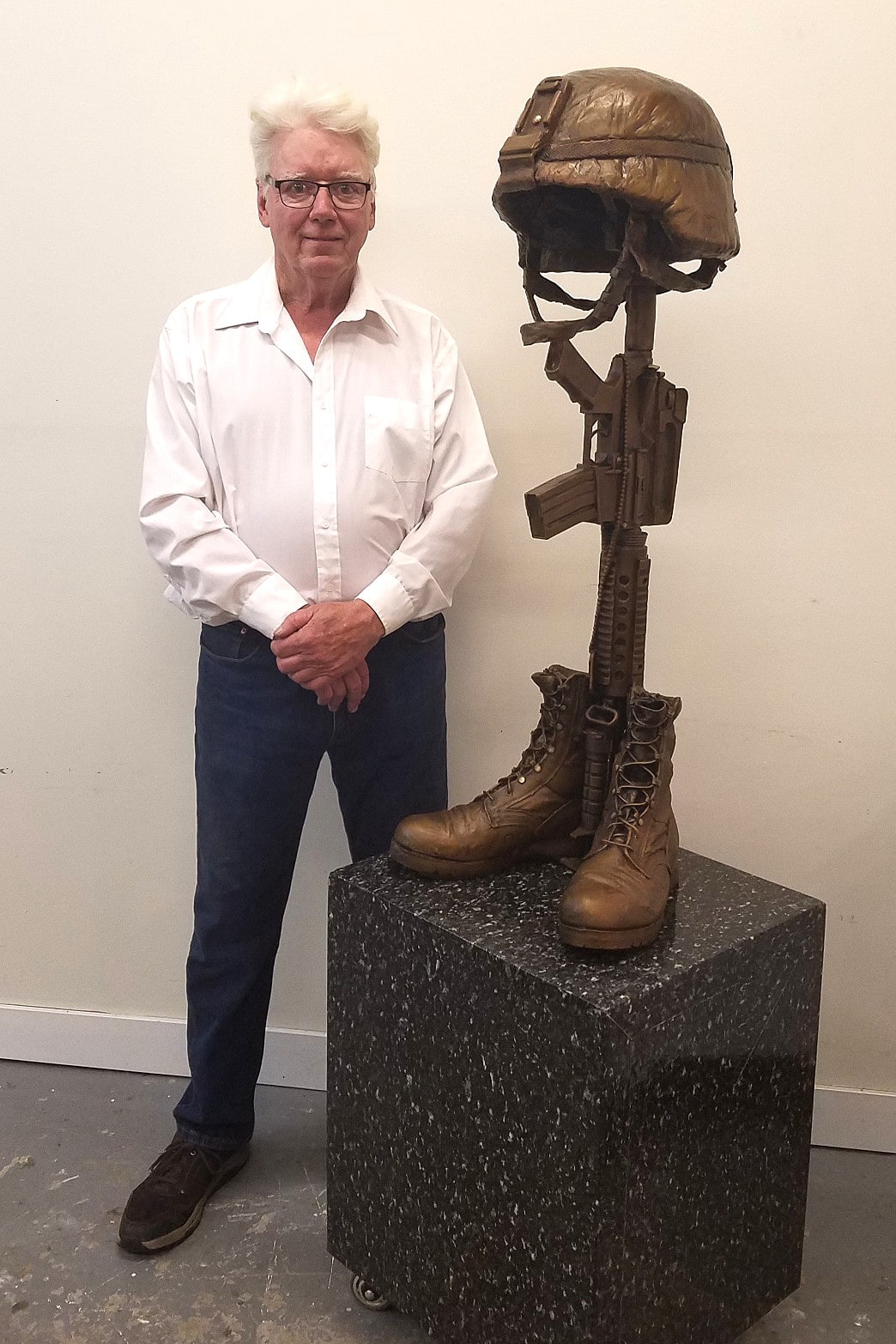 Get in touch with us today

Tell us about your hero or loved one. Let us create a monument to honor them.